I've commented on "Elephant Kashimashi's songs" on Twitter, and would like to compile them on this blog. Our team plans to translate them gradually by 2020, which aims to inform foreigners about Elekashi and make an opportunity to listen to their songs. As Paul McCartney sang "Hey Jude" at the opening ceremony of London Olympics and "The Who" performed the medley at the closing ceremony, I personally hope "The Elephant Kashimashi" will perform at Tokyo Olympics in 2020.

The range of expressiveness surprised me, compared with 1st album. Why does Miyaji think "kind river"? Emotional… Masamune Kusano (Spitz) & the film director Hitoshi One of "Moteki" like this song too.

We often hear "love" and "baby" in western ROCK music. I was very moved by Miyaji who expresses them in Japanese ROCK. Moreover, his singing voice is powerful and angry, but his lyrics depict Japanese-ish melancholy too.

This song is just lamentable when a 60-year-old man sings it looking back on his young days, but I'm impressed Miyaji sang it at the age of around 20. Dreams and hopes that he depicted at that time were magnificent, and he might be puzzled by the gap between his dream and reality…?

Surprised to hear Miyaji sings "Be by my side", but the songwriter is Tomi. Now I see😁This is the only song, which Tomi made alone, among ElephantKashimashi's. It's popular with EVERYBODY, and is often performed at concerts. High point sounds very good!

The intro makes me feel nostalgic and stirs up something in my mind little by little. Lyrics and performances are all simple. Persuasive singing voice would make EVERYBODY stop fake smile. Reminiscent of Jazz "Take Five".
The 25th anniversary MrChildren covered "Taiyo Giragira" of ElephantKashimashi at "THE FIGHTING MAN SPECIAL Do・Do・Doooooon! ～Dream music session～" on Mar 18, 2018. The arrangement was wonderful, and Sakurai's singing was overwhelming!!

At first, guitar sound coming from the left earphone, and Miyaji's singing voice from the right. They overlap on the hook. Lyrics are more abstract than before, but sophisticated.Written in lots of Hiragana, lyrics are literature rather than ROCK.

In the 2nd album, this is the only song which makes us feel powerful ROCK spirit like the 1st album. Without working →Getting tired →Hallucination (=Genkaku) →Interesting lol. Mukai of ZAZEN BOYZ likes this song.
Lyrics: Ishi kun & Miyaji
Music: Ishi kun

The song with messages to the hometown. The vocal's emotions are running high in the second half. From Miyaji's lyrics we can feel his love for Japan.

As the title says, Miyaji seems to stay at his own home. His last shout is contrary to the lyrics "I'll live modestly". Attractive!

Here it comes! 2nd ”Otoko(Man)" series. Anger explodes in this last song of 2ndAlbum. Staple encore song in the concert. Without it, ElephantKashimashi's concert would be unsatisfactory to many fans. Miyaji said in the interview, "Performance, song, and lyrics are all good."

2nd Album is Elephant Kashimashi's early masterpiece. It's regrettable that maverick image was preceded. This album may sound heavy if you don't listen enough. There are not many passionate albums like this.

As I expected, no matter how many times I listen to the album... It's amazing... Unbelievable! What on earth is this album!? The one and only band. Who could imagine "current" Elephant Kashimashi from "previous" Elephant Kashimashi?  Nobody could.  I feel Miyaji's energy and anger because he was young back then. It was not the only reason to generate these forces.

I also feel something transient in the 2nd album that doesn't exist in the 1st one. It is like a star before burning up or a comet which is about to strike the atmosphere at any moment. I'm not sure though. However, it still has the momentary light. It's impossible to hear such a sound source from other bands. I have heard it only from the 1st, 2nd, and 4th albums of this band.

It is often said that “The Elephant Kashimashi” became mellow. That's fine, fine. That means they have been accepted by more people. But the fan wants to say, "Hey, hey, it won't be that easy." (← Like Miyaji says.)  They have never become mellow, never like 1st & 2nd albums which burn with more and more flames than before.

Now he is able to open and close the necessary drawer. To prevent burning out, he sometimes closes it calmly and sometimes opens it boldly. It's so scary to see it open (exactly Pandora's box - If it's opened with curiosity, the disaster would occur…and if it's closed quickly, hope will be left.), but "The Elephant Kashimashi" at that time still exists.  Even when he sings songs of 1st & 2nd albums now, his singing still shines brightly. It doesn't weaken, rather it is evolving. That evolution was seen when "Matsu Otoko (Waiting man)" was performed at YAON in 2017 and a new song "Easy Go" at Saitama Super Arena in 2018. Nobody can match them in power and performances, which are still marvelous.

Again, I hope the “current” Elephant Kashimashi will perform dazzling songs of 2nd album more often. The more I listen to his way of singing and choice of words, the more I feel they're the Japanese ROCK itself!

Last, but not the least, I hope "The Elephant Kashimashi" will sing "Ohayo Konnichiwa (Good Morning, Hello)" in Japanese at music festivals in the world. I wanna see that just one time… at least once (lol)  If they do, I'll go to the festival, I'm not really into going overseas and FES though! (hahaha). Like "X JAPAN", does Elekashi have overseas connections!? OMG😱 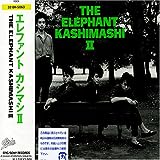 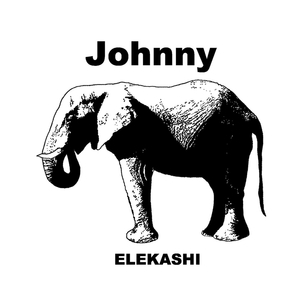